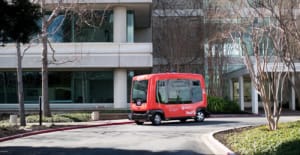 New self-driving shuttles are set to enter a final round of testing in California, this time taking to public streets.

It is a 12-passenger small, autonomous shuttle. The Contra Costa Transportation Authority (CCTA) in Walnut Creek, California, received admission from federal authorities to test them within the 600-acre Bishop Ranch business park in nearby San Ramon.

The battery-powered electric buses have no steering wheel or pedals. These buses are made by EasyMile, a French company. They move at slow speeds, topping out at about 25 miles per hour.

“Hopefully we will get a permit to operate here (from the California Department of Motor Vehicles) shortly, and then we can begin testing on public roads here as early as next year,” said Randy Iwasaki, executive director of the Contra Costa Transportation Authority.

The testing will mark Phase III of the project, made significant by the fact that public roads are involved. During this phase of testing, the vehicles will not be available for the public.

It is not yet clear how long the testing will take, officials say.

“You want to get it right,” said Iwasaki. “This is all new ground. And so, let me just say this, we are going to take as long as it takes to do it right. If we have a problem, we are going to set this whole technology back some ways.”

CCTA and its partners GoMentum Station, Bishop Ranch and EasyMile announced the start of Phase II testing in March 2017.

The EasyMile vehicles, known as EZ10s, have already traveled more than 100,000 miles worldwide, “but additional testing is needed to advance the technology,” said Lauren Isaac, a spokeswoman for EasyMile. “Over the next few years, we can expect to see autonomous vehicles deployed in more complex situations and at higher speeds.”

The Minnesota Department of Transportation recently announced a plan to use the EasyMile shuttles to test autonomous vehicles in winter conditions.

“Their expertise will help us learn how these vehicles operate in a winter weather environment, so we can advance this technology and position MnDOT and Minnesota as a leader,” said Jay Hietpas, MnDOT state traffic engineer, and project manager, in a statement.

The testing will start in November and go through February 2018. The shuttle will also be showcased during the week of the 2018 Super Bowl.

“Cities all over the United States are anxious to expand these types of vehicles,” said Linsey Willis, director of external affairs at CCTA. “It is a little bit of a chicken-and-an-egg type of situation. There are not a lot of guidelines or regulations in place. You have a great need. And you have a lot of cities that want to do it, but there is no manual or straight path. So, we are creating a new ground.”

“Doing something for the first time is always the hardest,” she added.