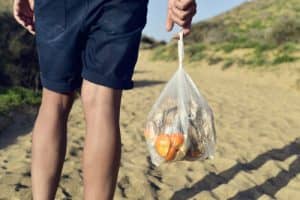 If you live in the city of Sacramento, you can’t recycle yogurt containers, bubble wraps or medicine bottles. Recycling law is changing in Sacramento to reflect new research.

A brochure from the city’s Recycling and Solid Waste division arrived on many Sacramentans’ doorstops July 1, announcing the update that arrived about recycling rules in the city.

Perhaps most significant is the change in the policy for recycling plastic. There are 1-7 labels of plastic item types, housed inside a recycling-logo triangle.

Previously, all plastics items could be recyclable in Sacramento, whichever number they were labeled.

Now, only plastics with Codes 1-3 are allowed in the recycling bin, said Erin Treadwell. Treadwell is the Community Outreach and Media Manager for the Solid Waste and Recycling Division.

Sacramento’s various restrictions on recyclables are the result of a chain reaction stretching from China to Northern California, as The Sacramento Bee reported in March.

Mixed plastics, which describes many items labeled with Codes 4-7, are harder to reuse, said Paul Rosynsky, a spokesperson for Waste Management, Northern California/Nevada. The same goes for shredded paper.

Treadwell emphasized that the newly restricted plastics tend to not be worth much in the recycling market, which makes them that much more unappealing.

The updated rules officially began on January 1, Treadwell said, but the city and Waste Management went back and forth on the details of the new rules and agreed not to announce the changes until July.

If residents are ever unsure of how an object should be disposed of, Treadwell encourages them to use the city’s Waste Wizard application on the Public Works website, which will be updated if new restrictions are imposed in the next 12 months, before the next informational pamphlet is mailed out.

Materials that fall under the following codes should now be trashed, not recycled, within city limits:

Citizens Step Up For Truckers