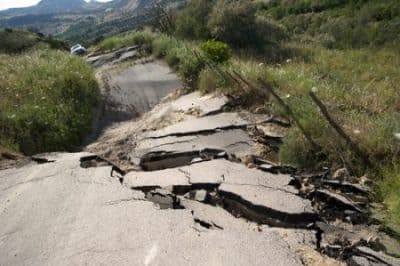 The quake took place at 4:49 a.m. at a depth of 8 miles, the U.S Geological Survey said. Its epicenter was in Riverside County, 6.8 miles north of Cabazon and 20 miles northwest of Palm Springs.

At least 27 aftershocks followed, the largest of which was a 3.2, the USGS said. The magnitude of the smaller quakes ranged from 0.5 to 2.2.

There were no immediate reports of injuries.

Renowned seismologist Dr. Lucy Jones said she slept through the earthquake, which was reportedly felt by more than 7,000 people throughout the region.

At a morning press conference held at the Caltech Seismological Laboratory in Pasadena, experts said the probability of a larger earthquake increases for the following week after a temblor such as Tuesday’s, but then those chances decrease over time. They added that the chances are about 1 to 2%, starting as early as later Tuesday afternoon.

The seismologists also said, however, that earthquakes in this magnitude range are seen in that San Andreas fault area every couple of years.

Caltech officials said there was no direct connection to the earthquakes and volcano activity in Hawaii, as for a possible relation.