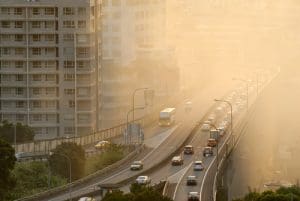 As many online results are showing this kind of information there appeared to be a conflict about the accurate information on air quality in Sacramento. At least one prominent source appears to have data that is either incorrect, incomplete or misleading.

Some locals — including meteorologists — have taken to Twitter to call out Google’s search result widget for air quality in the city, saying the readings have been “seriously inaccurate” for several days.

BreezoMeter.com gives a source for Google’s top result and it ranked Sacramento’s air quality as “good” as of 7 a.m. Tuesday, which means marking the conditions as “ideal air quality for outdoor activities.”

Tuesday’s AQI reading was 49 by 7 a.m. according to BreezoMeter. But this mark appears to be a morning measurement, not a daily forecast. The AirNow forecast for Tuesday also showed good conditions in the morning, but the forecast calls for a high AQI of 133. AQI forecasts for Auburn, Folsom, and Placerville were all above 150.

A warning is issued through Friday, advising residents to avoid or limit any kind of outdoor activates due to the influx of smoke.

“Older adults, people with chronic diseases and young children are most at risk and should avoid outside activities if they see or smell smoke,” Sacramento County Public Health Officer Dr. Olivia Kasirye said in Monday’s statement from the air district.

Coronavirus at the Capitol: Senate Delay and Test Shortage