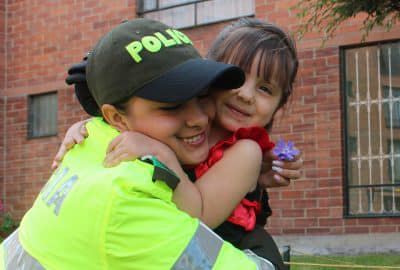 The kids we were St. John’s Program for Real Change. St. John’s is a shelter for women and children. Abra Ruthenbeck, the children’s program director, said that the kids would not otherwise have these opportunities. Moreover, she said many of the families have not had good experiences with the police. She stated that they often live in fear of police normally, so this event is a nice change for everyone.

The kids went on a boat and rode horses. Most of them had never done these activities before.

Brenda rode on the police boat next to Aidyn James Beggs, 8. He expressed worry before leaving the dock. He said he was nervous, because he had never been on a boat ride. But his fear turned to thrill when the boat hit the gas in wide-open waters. He in particular liked crossing underneath the Tower Bridge and said it was “awesome.”

Police hope the event builds stronger relationships between the community and police. In addition, Officer Marcus Basquez hopes that Wednesday’s activities inspire a new generation of officers. Basquez stated that the kids could maybe not only be police officers but possibly work for the Sacramento Police Department.

Ruthenbeck wants to build on the event in the future. She hopes there will be more horseback rides and officer visits to the shelter.

High School Cars! Best-Sellers Through The Years And Why They Sold