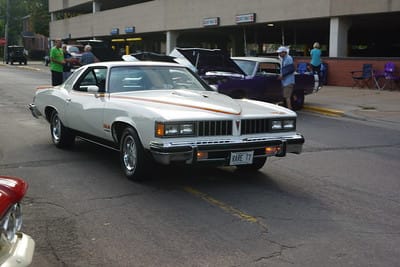 The Pontiac Can Am Is Born

The concept was born out of a combination of different vehicles. Take the 73 Lemans body, strap a 400-cubic-inch V8 engine in the front and give award-winning vehicle designer Jim Wanger full creative control to develop a color scheme that makes the Can-Am a one-of-a-kind sexy muscle machine.

Developed from the GOAT

Pontiac had no issues with utilizing the successful GTO name to market their special edition muscle master. The catchphrase for their advertisements read “Remember the GOAT”. The GTO and the new muscle car were related but were significantly different in most ways.

Pontiac Can Am Design

The Can Am package was on Le Mans cars painted Cameo White which was then accessorized in orange, red, and yellow graphics, as well as blacked-out lower panels and window trim. The standard road wheel was a color-matched Rally II with chrome trim rings. Many options were available, including the aluminum “snowflake” wheels offered on the Trans Am, and a steel or glass sunroof. Interior trim color options were the same as the base Le Mans and included red, black, white, and tan.