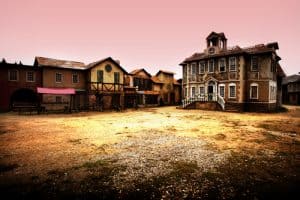 Did you know that a ghost town exists in Inyo County? Well, if you didn’t know, now you do.

The town is called Cerro Gordo and it is located in Inyo County. It has 22 building and about 300 acres of mining claims. It is on the market for $925,000. That’s about the same price as a house in San Francisco!

Cerro Gordo is near Lone Pine, both are in Inyo County. The entire town is 24,000 square feet. It was actually the first mining camp.

The area is protected in between two hills and it is very isolated.

A family has owned this town for years, however, they felt like now is the best time to put it up for sale.

They have chosen to sell the property with no conditions that come along with the sale. However, they do hope that whoever ends up buying the property can maintain the history and let it be open to the public.

A few visitors sparked interest in purchasing the property.

Decades ago, when the area was a successful mining town, people in Los Angeles referred to it as “silver thread. Everything that miners found used to get shipped to Los Angeles.

Mining took part until the late 1870’s after which the price of silver went down. A large fire that occurred during the late 1870’s was also the cause for people to abandon the town.

Shortly after that, the mining was back on in the early 1900’s and continued for the next several decades.

The late owner of Cerro Gordo, Michael Patterson, wanted to keep the property as a ghost town in regards to his wife, who was from Owens Valley.

As of right now, as long as the town is still on the market, it is open to the public until someone buys it.

Fisker Is Creating An Electric Popemobile? By The Grace Of God…