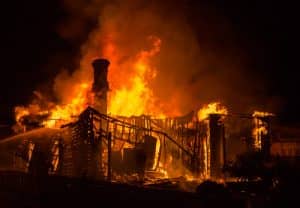 According to a Cal Fire update, a progress was made overnight as firefighters constructed containment lines. Setbacks included east, and west winds paired with difficult, steep terrain. A total of 3,600 personnel is working on the fire.

The death toll has risen to 6 individuals, including 2 firefighters as of Tuesday. The deadly blaze was started by a vehicle fire.

Evacuation orders: Evacuation centers are in place at Shasta College, Simpson College, Cross Point Community Church and Foothill High School. The large animal evacuation center is located at Tehama County Fairgrounds and small animals are being taken in at Haven Humane in Anderson.

Extensive road closures are in place throughout Shasta and Trinity counties and the city of Redding, including Highway 299 from Buenaventura Boulevard to Buckhorn Summit.

Long-distance spotting is challenging progress on the Ranch and River fires, which actively burned overnight and reached a combined 74,408 acres, according to a Cal Fire update.

Evacuation orders: Extensive evacuation orders and advisories have been issued for areas of Lake County, Potter Valley, Big Valley Rancheria and around Highway 20 as fire developments continue. Find the most up-to-date information at the Cal Fire incident page.

More evacuation orders were issued Monday for two blazes burning near each other in Mendocino County, which have destroyed homes and displaced thousands of people, officials said.

Evacuation orders: Spalding Tract is evacuated, and various campgrounds and day-use areas are closed to the public, said Lassen National Forest Service in an incident update. Lake users should be aware that there are helicopters dipping water out of Eagle Lake. The most up-to-date information can be found at the Whaleback Fire incident page.